The VMUG Wiki is sub-divided into a number of chapters, with each chapter representing a particular subject - and within in each subject a topic.

Each topic will in most case be supplemented by two videos. The first is a "Show Me How" where the process has been captured with software, and you can watch a live demo. The second video called "Discuss The Options " is a brief video were experienced in the VMware Community discuss the advantages and disadvantages of different configuration options.

The source for this part of the VMUG Wiki is published book authored by Mike Laverick. It was the first book that appeared on the newly minted VMware Press. It's hoped over time to update this part of the VMUG Wiki to reflect its style, rather than the style of the individual author. Currently, this content is based around the 5.0 release of SRM. Since then there has been a 5.8 release that offered improved scalability as well as some improvements around the product - most notably in the area of PowerCLI. Another significant change in the 5.8 release was the incorporation of the vSphere Web Client in the UI whereas previous SRM was based on the vSphere Desktop Client (sometimes referred to as the C# Client

Version 5.0 represents a major milestone in the development of VMware Site Recovery Manager (SRM). The need to write a book on SRM 5.0 seems more pressing than ever because of the many new features and enhancements in this version. I think these enhancements are likely to draw to the product a whole new raft of people who previously may have overlooked it. Welcome to the wonderful world that is Site Recovery Manager!

This is a complete guide to using SRM. The version of both ESX and vCenter that we use in the book is 5.0. This book was tested against the ESX5i release. This is in marked contrast to the first edition of this book and the SRM product where ESXi was not initially supported. In the previous edition of the book I used abstract names for my vCenter structures, literally calling the vCenter in the Protected Site virtualcenterprotectedsite.rtfm-ed.co.uk. Later I used two cities in the United Kingdom (London and Reading) to represent a Protected Site and a Recovery Site. This time around I have done much the same thing. But the protected location is New York and the recovery location is New Jersey. I thought that as most of my readers are from the United States, and there isn’t a person on the planet who hasn’t heard of these locations, people would more quickly latch on to the scenario. Figure P.1 shows my structure, with one domain (corp.com) being used in New York and New Jersey. Each site has its own Microsoft Active Directory domain controller, and there is a router between the sites.

Figure P.1 Two vCenter environments side by side

Each site has its own vCenter, Microsoft SQL Server 2008, and SRM Server. In this case I chose not to use the linked mode feature of vCenter 5; I will introduce that confi guration later in the book. I made this decision merely to keep the distinction clear: that I have two separate locations or sites.

Finally, the use of storage products in this book shouldn’t be construed as a recommendation of any particular vendor. I just happened to meet the HP LeftHand Networks guys at VMworld Europe 2008 – Cannes. They very kindly offered to give me two NFR licenses for their storage technologies. The other storage vendors who helped me while I was writing this book have been equally generous. In 2008, both Chad Sakac of EMC and Vaughn Stewart of NetApp arranged for my lab environment to be kitted out in the very latest versions of their CLARiiON/Celerra and NetApp FSA systems. This empowered me to be much more storage-neutral than I was in previous editions of this book. For this version of the book I was fortunate to also add coverage of the Dell EqualLogic system. Toward that end, I would like to thank Dylan Locsin and William Urban of Dell for their support. 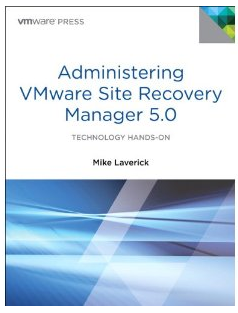