Installing the Horizon View Agent in the Virtual Desktop 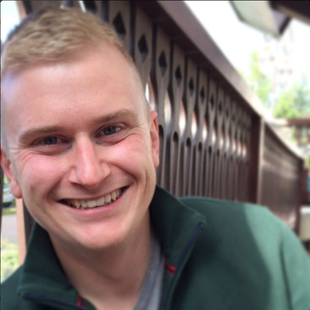 For the source of your virtual desktop you will need to create a VM which runs Windows 7 Business or Professional or Windows 8. You can create your source machine from an existing template or by creating a virtual machine manually. This virtual machine will be the desktops that end users connect with from their end point device. As you can tell VMware View is really about delivering a corporate desktop to corporate users wherever they are on the network – be it at home or work, as such only the business operating systems are supported, that and also RDP and adding a machine to a domain that are both a requirement for View are not supported on the home additions of the operating systems. Finally, it is possible to store virtual desktops on local storage, but doing so precludes features such as VMotion, DRS and HA. If you need to upgrade the ESX server software and you use local storage, you will be unable to move your virtual desktops to another ESX server without affecting the end users. There are some merits to using local storage for VDI but if you do, you will need to ensure you really do separate out the layers of OS, Applications and Persona. That would guarantee that it wouldn’t matter which virtual desktop the user accessed.

As you might expect, common problems normally exhibit themselves in the initial build of the Windows virtual desktop. Prior to installing the VMware View Agent, it’s worth creating a checklist to confirm that the VM corresponds with your normal corporate build. For example we would always confirm the following:

Requirements and Recommendations for the View Agent

• The virtual desktop is joined to the domain

• RDP has been enabled.

We would recommend that if you are using Vista or Windows 7 that you use lower security for RDP. This will mean any physical client will be able to connect without security errors occurring - it will allow a Windows XP physical client to connect to a Windows 7 virtual desktop. The higher level of security offered by RDP in Vista and Windows 7 is incompatible with older editions of the Remote Desktop client and may cause problems with dumb terminals. The screen grab below shows us enabling RDP on Windows 7 and allowing the members of a group we called Virtual Desktop Users in Active Directory the privilege of Remote Access. When you first enable RDP on Windows 7 you will receive a pop-up message warning you to change the power settings to stop the hibernation and sleep settings from prematurely ending remote access: 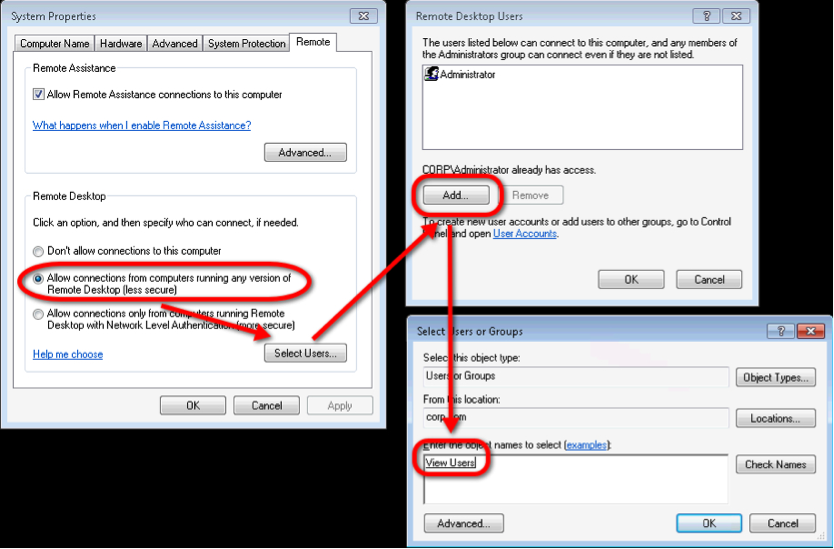 Some people go as far as using tools such as nLite and vLite (http://www.vlite.net) to strip out unwanted or unneeded components from the source Windows XP or Windows 7 media. While these tools can be useful, they invalidate your support and if they are used too aggressively they can cause applications or services to fail because of missing components. Although you will hear people online sing the praises of such tools, beware the unforeseen consequences of their over-enthusiastic use. As ever, there is a tension between optimizing Windows and breaking Windows.

1. To install the VMware Agent, double-click the VMware-viewagent-N.N.N-NNNNNN.exe

2. After a short time, you will presented with the Custom Setup component for the VMware View Agent 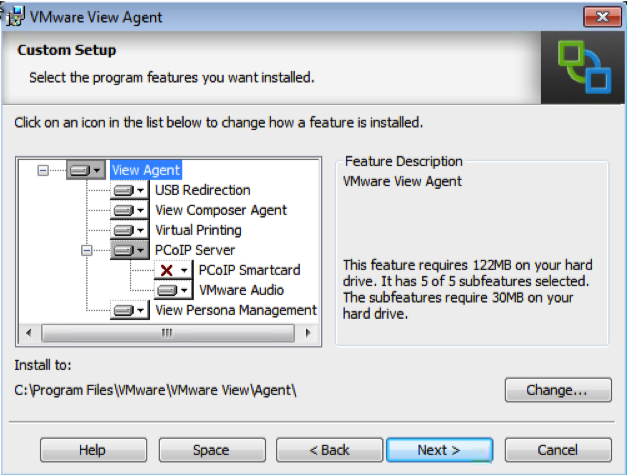 The View Composer Agent is a part of the Composer feature and required if you want to use this VM to be the base of all your future VMs, acting as a master from which other VMs are created. We would recommend installing ALL these features so you don’t have any hardcoded limitations, and so there is no need to revisit the installer of the agent because of a missing component.

In View 4.0, VMware introduced the Virtual Printing feature. VMware acquired a license to the Cortado ThinPrint technology. Cortado still exists as independent company - VMware did not acquire the organization – so this is merely a technology exchange. Virtual Printing renders print jobs into a much smaller PDF format at the physical location of the virtual desktop, and then redirects the PDF to the physical print device. It significantly reduces the size of print jobs within the virtual desktop environment. Your network teams will appreciate this too!

In View 4.0, VMware also licensed a new display protocol called PCoIP (PC over IP) – a protocol developed by a company called Teradici, and optimized by VMware engineers for implementation in software. Teradici have historically specialized in high-density graphics rendering using special hardware. The variant of PCoIP in View is essentially a software implementation. It may be the case that the thin clients you use can be enabled with Teradici, so both the server and client are accelerated, and as you can see, there is a version that allows for the use of Smart Card authentication.

The Agent will enable RDP on the virtual desktop if you have not done already. However, the permissions and rights required to make it work will not be affective.

Notice you also now get the option to install View Persona Management in the View 5.X Client Agent install. We will explain this in more detail in the GPO chapter.

Once we have made these selections the installer will complete the View Agent installation, once completed you will be notified that a reboot is required for the configuration changes to take effect.

After the reboot you should complete any cleanup actions on the desktop, such as deleting temporary files, run an IPCONFIG /Release from the command line and shutdown the virtual machine ready to be used as our source virtual machine. It is also good practice to take a snapshot of the virtual machine in this clean state; in fact if you use this machine with VMware Composer (to be covered later) it is a requirement.

In this chapter we have discussed the VMware View agent and it's various roles and covered the installation of the View agent into our source desktop. In the next chapter we are going to move on to discuss the various types of software client for VMware View.