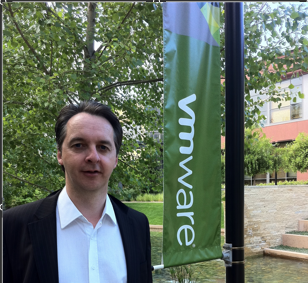 Mike Laverick is the Founder of VMUG Wiki. He's been active in the vCommunity since 2003. He was born on the 18th Feb, 1970 in small North-Eastern town in the United Kingdom called Stockton-on-Tees. As a teenager, Mike had an early ZX Spectrum computer upon which he played games, and tried unsuccessful to write a game. At school Mike learned about computers using the popular BBC Micro system, upon which he created a database to record all this records in his music collection. Mike left school with few qualifications (Maths, English Literature, Computer Studies), and recognising the errors of his way went back to college. Having spent three years turning around his academic misfortunes - he left Stockton-on-Tees in 1990 to read English and American Literature at Warwick University. There he encountered his first word processor - Microsoft Word for DOS.

After graduation, Mike went on to teach training college in Bristol, UK. However, he hated children, and they hated him - and flunked out of the PGCE programme without completing the course. Back in Stockton-on-Tees, Mike happened upon a job ad requesting graduations with some teaching experience to be 'Computer Trainer". This covered teaching adults the rudiments of Windows 3.x and early Windows programs such as Lotus 123 and Microsoft Word. Later, Mike learned the then popular Novel Netware 3.12 system before taking a career break. In 1996-7, Mike undertook a Master degree in "American Studies from the 1950's to the Present" at University of East Anglia, covering a range of domestic and foreign policy issues, as well as literature and cultural theory.

After graduation, Mike return to his IT career taking a technical trainer role in Bristol, UK. There he mastered and delivered the Microsoft Curriculum in technologies such as Windows NT, Windows 2000, Active Directory, Microsoft IIS. Toward the end of his time he also became a Citrix Certified Instructor as well as Microsoft Certified Trainer. After a brief career break spent travelling around the US, Mike returned to the UK in 2001 only to find himself made redundant months later. Mike started his own freelance training company and website called "RTFM Education". In 2003, stumbled upon VMware and virtualization, and excited by the prospect of all new vista of technology to learn plunged in at the deep-end. Mike subsequently became a freelance VMware Certified Instructor delivering the VMware Curriculum across Europe. In 2009, Mike after writing series of books and contributing to local VMUG's - Mike sold the "RTFM Education" to TechTarget Inc, a media company based in Boston, Mass. Mike used the next two years to start a podcast series called the Chinwag and the Vendorwag. Additionally, he started speaking at larger VMUG "User Conferrence" Events across the US.

In 2012, Mike joined VMware as their "Senior Cloud Infrastructure Evangelist". In August, 2014 he moved to the position "Product Integration Architect" within the EVO:RAIL Team.